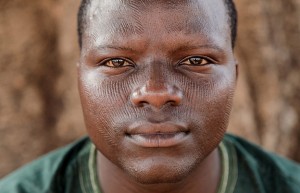 While tattoos are all the rage, I have to wonder why they are so prominent in sci-fi fantasy art lately.  Okay – maybe I’m a bit stodgy (none of my friends got tattoos when I was growing up because … well, it wasn’t cool yet – only the bikers were set on donning the ink) but it seems to lack much creativity in my opinion.  At least, some artists are using glowing or neon tattoos … that’s at least forward thinking and some of it looks pretty cool.  But if we’re going to look into the future (for sci-fi) or into strange customs (fantasy), maybe we should look at what else is already available for consideration.  This world has a long history of body altering to investigate.  Take the featured image for example.  This young man has gone through some significant pain to arrive where he is at.  Scarification as a ritual is fairly well known in Australia but other peoples have engaged in this practice as well.  Google scarification and you’ll find plenty of interesting pictures to choose from.  Whether burn scarification or cutting scarification, there are many stylistic variations on this widespread practice.  And some of these scar canvases are downright intricate.  Consider these: 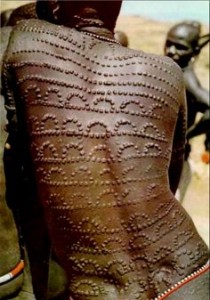 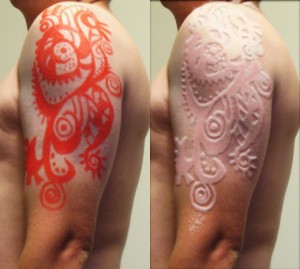 If you think getting a tough guy tattoo is supposed to make you look rough and tumble, think again: scarification dudes makes tattoo dudes look like a summer’s pansy.  If I had to choose between fighting a guy with skull tattoo on his arm or a guy who voluntarily burns large tribal designs to make a statement about his body image, I’m taking shots at the tattoo guy for sure.  I’m betting the burned guy enjoys pain and he isn’t going to tap out.  The tattoo guy?  Well, I’ve seen some pretty cute girls wearing tattoos – and they’re showing up on pretty sensitive places too (like the top side of their feet).  The tattoo isn’t counting for much masculinity in my estimation.  Piercings?  Well – some of those are looking pretty painful too so … I guess that will depend on the size and placement.  Voluntary skin removal is definitely getting my vote for a leading tough guy as well … but if you’re really looking for something scary, try teeth sharpening.  You’d think it might be reserved for cannibals or vampires but … it’s not. 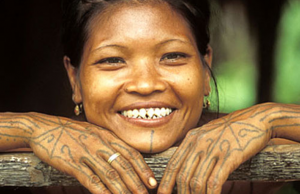 Implants are also gaining some traction and they probably offer some drastic possibilities … if nothing else, they offer plenty of opportunity for creative options.

So if all of that is available today, what does the future look like?  If I’m writing sci-fi, I’m banking on genetic modifications.  Like elf ears?  Maybe.  I’m guessing we’ll don traits that are both aesthetic and pragmatic.  Chameleon skin, camouflaging squid-like skin, or maybe … see-through skin might be viable options next century (see-through skin definitely offers a certain intimidation factor…).  Other options? Teeth coloring, extra digits, stronger bones and muscles, eye enhancements (Raistlin-esque hourglass pupils anyone?) or hair that grows in bright colors … or maybe it grows in different colors every week or so ….  Any of these possibilities could be found in either sci-fi or fantasy worlds and I’m sure there are hundreds of variations to consider as well.  True enough: tattoos have probably been around longer than any of these other body modifications but if you’re looking to make your world building more exotic, leave the tattoos as a sidebar.