Microraptor, Dinosaurs, & the Origins of Birds 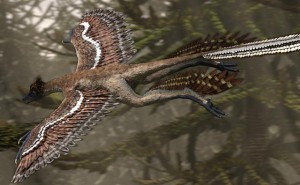 Microraptor was a four winged dinosaur that provides clues as to the origins of birds.

I was particularly interested in the above documentary for at least three reasons: (1) many of literature’s best loved monsters come from real creatures and/or fossil/skeletal records (okay, I admit, that was really the only reason I was really interested in the documentary); (2) I liked Avatar’s “dragons” and wondered whether or not a beast like that would likely ever evolve on this or some other planet; (3) many insects evolved from four winged creatures to two winged creatures (the “hoods” or shells of a beetle clearly show evolutionary vestiges of their second set of wings).

The documentary didn’t fail to disappoint.  While it focuses on whether or not microraptor was the ancestor of birds and whether or not some other dinosaur was the ancestor of birds (no spoilers as to the conclusion), I thought the documentary had a broader appeal – especially towards the end when they took a model of microraptor and put it through a wind tunnel to discover how it must have flied … or glided.  It was really cool to watch a team of scientists take a few fossils, reconstruct the skeleton, reconstruct the muscles and body tissues, reconstruct the feathers, and then adjust the model to figure out how it must have flown – and the results seemed very conclusive and they made biological sense in terms of survival as well … and it may easily explain whey they went extinct too.

In summary, I thought the documentary provided some very interesting insights into the ancestry of birds, it offered a fabulous review of how modern scientists are learning about dinosaurs, and it provided a wonderfully welcome burst of inspiration for my upcoming book: Unproven.  What do you think?  Is microraptor the ancestor of birds?  Do you think the record is compelling in regards to how it must have “flown”?