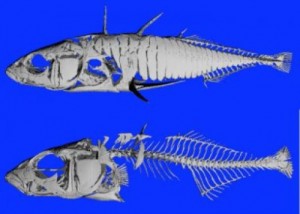 Threespine Stickleback fish offer scientific reasons to beef up our movie monsters.  They “evolve” fast.  Really fast.  Within ten years, these fish can move from salt water to fresh water, change their skeletal system in a massive way (just look at the image), and they can grow lots of new teeth.  It’s all because of regulatory genes – they modify the body of the fish depending on its environment.  So what does that have to do with movie monsters?  Well, I would argue that there are at least two significant ways that this information could benefit a sci-fi/fantasy book/movie.

1.  Do aliens have regulator genes?  Why not – it seems like all earth creatures do.  And if they have these genes, what is to prevent them from coming to a new planet only to be surprised by their own physical changes over a decade of time? or by the changes in their offspring?  A similar idea worked pretty well for Gremlins – that mogwai just didn’t look the same after it incubated in that nasty egg thing.  In the alternative, what if they knew that they would change in earth’s environment?  They could show up looking all normal and innocuous.  They could slowly integrate into society only to become horrible predators after a decade or so.  Heck, this is science fiction – maybe they could “evolve” faster or slower depending on their nefarious plans.  Perhaps a sophisticated alien could control and adjust its own regulator genes.

2.  What if some beast on this or another planet just keeps evolving as its environment changes?  Perhaps its armor becomes tougher as artillery use increases.  Perhaps its camouflage becomes more effective or it gets faster or it becomes a nocturnal hunter or it heals faster or it reproduces faster.  Monster movies often focus on the human effort to understand the enemy and then, after discovering some tricky weakness we never saw coming, destroying the monster that previously seemed invulnerable.  Threespine Stickleback could offer a much more interesting solution.  What if every time we came to understand the weakness of the monster, it evolved to its new environment?

I’ve said many times that mother earth has enough cool discoveries to fuel a lifetime of sci-fi/fantasy writing.  Readers are becoming more savvy than ever so they are requiring higher levels of sophistication behind our literary inventions.  But with all the cool things scientists are discovering, it isn’t hard to find the solution to whatever you are looking for.

So what do you think?  What are other creative ways we could use this evolutionary discovery to spice up our movie monsters?