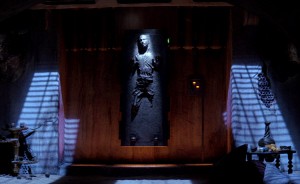 Suspended animation conjures images of a frozen Hans Solo, Avatar-esque space travel, and Star Trek’s infamous Khan.  Doctors have been seriously experimenting with possibilities since the 1950s when space travel was first becoming a reality.  Sixty years later, we’re still waiting for a solution to this conundrum … or are we?

Legitimate research on hibernating monkeys (who share 98% of our DNA) and similar lines of research have given us clues as to how we could accomplish this feat but there always seems to be some troubling hurdle to overcome.  For instance, we learned that hibernating animals (including some bats) store white blood cells in lymph nodes to keep blood from clotting in mammal bodies when temperatures lower.  That insight offers us the potential to essentially freeze ourselves without dying (some animals – like the arctic squirrel – can survive temperatures below freezing).  It seems reasonable that these biological solutions could work with humans as well.  After all, a number of people have survived tragic freezing accidents (google Anna Bagenholm for example).  However, reproducing their specific situations would be both unpleasant and challenging to say the least.  And hibernating animals are subject to diseases while hibernating because white blood cells are … well … on vacation so … if your body wakes up so you can combat the disease, you may be in danger of freezing to death.  With risks like these, it seems unlikely that very many people are going to line up as volunteers to test the waters of suspended animation.  At least, it seems unlikely unless they have some mega carrot hung in front of them.

There’s a new alternative.  Despite our lack of any real success, recent research has led to a promising technique that may offer a legitimate solution.  To be fair, the doctor who pioneered this new method doesn’t like it being called suspended animation so I’ll tip my hat to that label preference, honor his intentions behind that label rejection, and … continue to ignore it.  This is, after all, a SFF blog, not a medical journal!  Dr. Samuel Tisherman essentially drains out all your blood (after you’re already died), replaces it with a very cold saline solution, and leaves you in suspended animation for a few hours so that surgeons can be better prepared for the operation.  Longer time periods are foreseeable.  Testing with live patients began months ago but his work has been limited both in location and scope.  Despite the fact that similar techniques are already used in some heart surgeries and despite the fact that the technique has a proven track record on live animals (who never died), it may be a while before the procedure is approved for use on live humans.

Once the technique becomes mainstream, DNRs or “do not resuscitate” orders may have to be reconsidered by people all across the country.  I already advise my clients about this development when teaching them about living wills in Utah because Utah has a system allowing your agent (attorney in fact in other states) to override your wishes in artificially prolonging your life.  Dr. Tisherman’s procedure is a good “theoretical” example of how artificially prolonging your life may be used in situations that are not now contemplated by the average person on the street.  We think of “pulling the plug” as a way to stop a wasted prolonging of life by machines when a patient would die without the machines … but this new procedure may be used in very similar scenarios in the future.  For example, what if you needed surgery to remove a bullet or to stitch up a nasty knife wound to your lung but the best doctor for the job can’t arrive until you would already be dead?  What if one of your organs was on the verge of failure before your donated organ could be shipped to you?  Dr. Tisherman’s procedure (or an updated version) could be used to freeze you to the point of death (literally – your heart stops, breathing stops, etc.), allow the doctor (or organ) to fly in from out of state, allow the surgery to be carefully planned and implemented, and then allow the doctors to safely supervise your resuscitation.  A DNR might forbid this type of procedure (depending on how it is drafted) but some patients would undoubtedly see a huge distinction between this procedure and “pulling the plug” procedures where someone is essentially in a hopeless situation.

Either way, we have reason to hope that this procedure will be utilized more the future and that advancements will likely be forthcoming.  And with those advancements, it seems likely that suspended animation may fall quickly on its heels.  What do you think about the ethical ramifications of suspended animations in the operating room?  in space?  in any scenario?