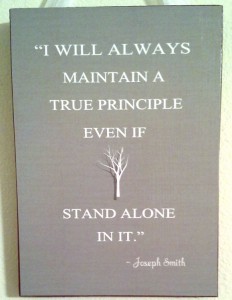 Recently, I’ve reviewed the D&D alignment systems for the purpose of looking at characters from a different angle.  Simultaneously, I found myself looking at a quote I have on my bedroom wall: “I will always maintain a true principle even if I stand alone in it.”  That’s a lofty rule I try to live by.  I wish living it was as easy as adopting it.  Only this morning did I consider that this kind of statement would most likely only be made by someone of a Lawful Good alignment.  But then I considered that this may be extrapolating a lot from the statement.

Lawful Good characters sometimes find themselves faced with the dilemma of whether to obey law or good principles when the two conflict: for example, what should they do when upholding their code of ethics would cause harm to an innocent person? or what should they do if the law conflicts with their religion?  These can be tough questions.  This particular quote could be construed as a way to bypass that challenge.  It essentially adopts the law of God (as understood by the individual) as the only standard to follow.  That would negate any question as to whether or not one should obey a civil/criminal law if it conflicted with God’s law – because it only acknowledges God’s law.  Indeed, Joseph Smith’s early followers were pretty heavily committed to civil disobedience (but arguably, that only lasted sixty to seventy-five years).  However, that is only one way of interpreting the statement.  Perhaps reading this statement in this way all but nullify’s the idea of lawfulness – if one interprets lawfulness to mean following civil/criminal laws of one’s country.  If one reads the statement this way, it should probably be classified as Chaotic Good (despite the fact that it is founded upon a concept of law).  After all, it essentially challenges any laws created by mankind if those laws conflict with the individual’s understanding of God’s law.  This is where I believe the D&D system starts to unravel a little.  There is, after all, plenty of room for debate as to how one should interpret the several alignments.  Then again, the system was most likely intended to establish basic guidelines, not an infallible system that applies to every facet of life.  Since I have personally adopted this quote as part of my personal moral system, I’m now having another identity crisis: am I Lawful Good or Chaotic Good?  Perhaps it depends on my mood … or perhaps I’m Lawful or Chaotic Neutral and merely perceive myself as Lawful or Chaotic Good?  Hmmm …

Joking aside, in day to day life though, I consider this statement one of the best parenting guides a person could ask for.  With a gaggle of children, I think about parenting a lot.  I watch other parents disciplining (or not disciplining) their children in the supermarkets, parks, malls, businesses, and at church.  When I observe especially well behaved children, I commonly drill the parents for their insights on good parenting.  There are a few common themes but the most frequent thing I hear is that they set up principle based rules and they consistently enforce those rules.  Sure, studies show that eating meals together as a family is a big factor – I’ve observed that; studies show doing activities together as a family has a strong, positive effect and I’ve seen that too – but establishing rules that are based upon principles (rather than ” ’cause I told you so” or ” ’cause I’m your father”) is the single most frequent answer that the best parents offer.  Sometimes they call these “appropriate boundaries” or something similar but it all means the same thing.  While principle based rules may make sci-fi/fantasy characters overly predicable at times (we always knew Batman couldn’t just kill the Joker just ’cause he may have wanted to), it makes for well behaved, well adjusted children.  While it may be a weakness in Batman (because he can’t easily defeat the Joker who is arguably, Chaotic Evil), it seems a beneficial strength in real life when it comes to governing ones’ self and accomplishing a lot in life (maybe that’s why Bruce Wayne somehow always retains his wealth even when others cleverly try to steal it).

So what do you think?  Is this statement Lawful Good or Chaotic Good?  Could a character only be Lawfully Good if the civil/criminal laws he/she lives within are internally consistent to certain principles?  Is all of this overanalyzing D&D’s alignment system or is this the precise sort of dialogue it was intended to engender?