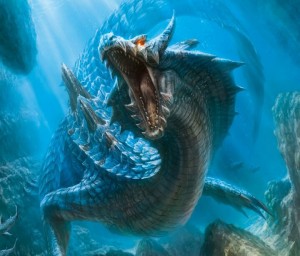 Lagiacrus, the flagship monster of Monster Hunter 3, deserves your attention – and not just because this picture is so boss!  For some reason we can all probably relate to, fire breathing dragons hog the press – and maybe that’s fair.  After all, they can deal a devastating amount of damage that destroys entire villages with only a few fly overs.  Case in point: Smaug.  The last installment of the Hobbit movie trilogy epitomized that classic perspective.  In contrast, underwater dragons rarely receive any of our consideration at all.  Why so?  Perhaps it is because underwater adventures are dangerous enough already.  Fighting a shark seems unfair to most of us.  Fighting a dragon just seems … well … gruelingly unfair.  Add to that Lagiacrus’ ability to breathe some sort of electric “flame” and it seems that underwater trips are so unrealistically unjust that we completely toss the idea aside.  Just stay out of the water for heaven’s sake!

As sci-fi authors though, I think we should follow these gamer’s lead a little.  Maybe our imagination can be a little more visionary.  Consider these thoughts: first, shark skin wetsuits will be available in less than a decade.  You can check out my previous blog about the details but for now, consider this: these new suits will offer unparalleled ability to travel through water.  Shark skin naturally propels you forward and it will undoubtedly offer better protection from the underwater environment than anything we’ve seen yet (much heavier and more cumbersome chain mail suits excepted).  Add to that the soon coming underwater, self replenishing breathing apparatus that don’t require a large tank and a tete a tete dragon contest seems at least a little more promising.  Most sci-fi authors limit themselves to underwater diving that looks much like modern scuba diving gear or a submarine-esque vehicle that isn’t particularly fast.  Twenty years ago, that was reasonably visionary.  But as literary agent Sara LaPolla recently tweeted: “The future is now. Sci-Fi is harder.”

Sci-fi tip: Check if your cool gadget is more futuristic than Google Glass or MIT’s invisibility cloak. The future is now. Sci-fi is harder.

So what does that mean for underwater dragons?  It means sci-fi/fantasy authors ought to reconsider their role in fiction.  Instead of envisioning them as invincible unless we use massive torpedoes, we could envision them within a smaller scale combat perspective.  Perhaps there are too many of them to make torpedo attacks viable.  Perhaps that would be cost prohibitive.  Or, perhaps visionary environmentalists would freak out over all the unnecessary damage that might be caused by torpedoes.  Heaven forbid – a rare microbe might become extinct if torpedo usage isn’t banned!  Or, perhaps your characters are in a fantasy (low tech) environment but they developed methods of underwater maneuverability that are similar to what we can now envision.  Whatever your rationale, it seems reasonable to envision underwater dragons as a more viable monster to use in stories with a little more imaginative verve than we’ve exercised in the past.  Or maybe I’m off my rocker.

What do you think?  Are underwater dragons just too far outside of reality or are they viable monsters outside the gaming world?  Seasoned Jedi avoided engagement with a similar monster in Star Wars: the Phantom Menace.  They suggested they wouldn’t have survived (“There’s always a bigger fish.”).  If the Jedi are afraid of combat with a sluggish underwater dinosaur, who would be willing to brave the dangerous waters of underwater dragons?  Iron Man?  Aqua Man (haha)?