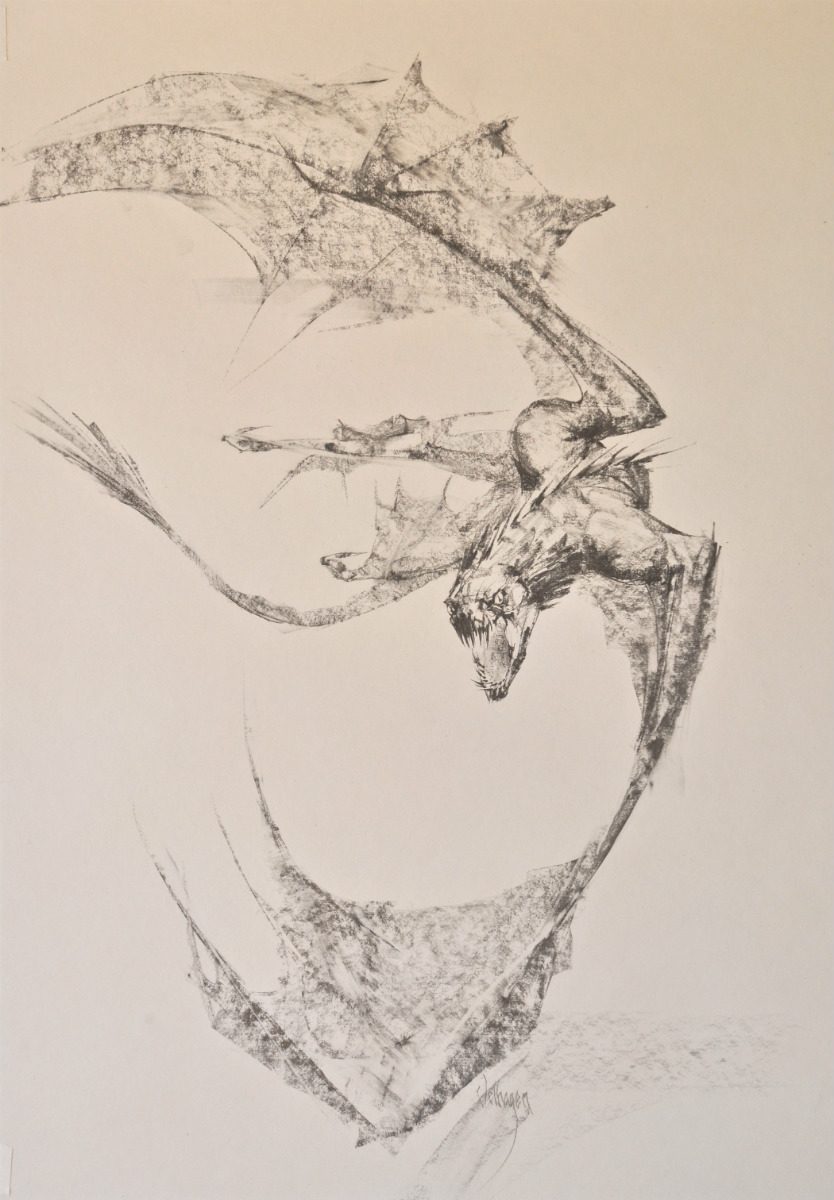 As many of you will know, I’m a big fan of Eric Velhagen’s art.  He’s been featured a number of times on my blog and he recently landed a job illustrating every month of George R.R. Martin’s 2018 Game of Thrones art calendar.  The image featured above is Eric’s concept design for kotrakoy, four winged beasts inspired by microraptors that are featured in my upcoming book: Unproven.  Even though kotrakoy are fearsome for reasons more intriguing than scary aesthetics, I chose Eric Velhagen to illustrate the book cover because he has an untraditional approach to beasts and because he’s fabulous at capturing movement and action in his illustrations.  And while I’m stoked over this concept design … wait until you see the actual cover design!  I’ll be unveiling that in a week or so.

Unproven, will launch in a couple of weeks (the 27th if magic happens – by coincidence, that’s my birthday).  Dave Farland is helping me to market the book (he pitched the marketing for Harry Potter and Twilight) and Diann Read is currently editing.  I’ll be announcing the voice artist who will be recording the audio version soon so keep your eyes open for that information!

Until then, here is the back cover blurb:

When Technology Advances and Magic Evolves, no one is safe.

SHADOW IS AZH’NAHN, A POWERLESS MAGE born into a culture that prides itself in sharing the earth’s powers. When he chooses a life of voluntary exile to preserve his family’s honor, Shadow receives a mysterious call to witness the unearthing of kotrakoy, treacherous telepathic beasts with four wings and four rows of teeth. As he watches their unholy resurrection with great horror, kotrakoy open their minds to his and offer a glimpse into what life would be like wielding a mage’s powers.

As Shadow races to warn his people of the impending threat, he discovers a mysterious Trayki woman hanging from the trees and on the verge of death. Uncertain what to do, Shadow initially hesitates to rescue this woman whose people embrace technology and eschew his culture. As Shadow tends to her glider crash wounds, the earth unites them in a soul bond, a sacred union that gives Shadow an unerring duty to protect and preserve her life. And that duty will be fraught with peril: Trayki troops begin bombing Hiwalani villages and while losses mount, magic evolves and Shadow’s people lose their power.

The Hiwalani must rely on inexperienced youths to master the new magic and stop enemy attacks. Desperate to save their people, few make any progress at all. Only the outcast azh’nahn seems to understand it – and very few trust his judgment. When Shadow believes he’s unlocked the solution, it involves empowering the most deadly kotrakoy and risking the complete annihilation of his people. While his solution sounds reasonable in theory, there is no time to test it. It’s UNPROVEN.