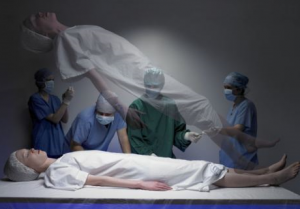 I had a near death experience (NDE) years ago.  I find it somewhat amusing that NDEs continue to ignite such intense controversy but recently, some German scientists determined the controversy wasn’t brewing hot enough so they made it boil over.  Maybe Germans are thrill seekers by nature – I don’t know – but what I do know is that Psychologists from the Technische Universität of Berlin (astoundingly) convinced 944 people to volunteer to be killed and then resuscitated.  Careful to get a wide variety of thinkers under the death penalty, these German scientists were pleased to note that various Christians, Jews, Muslims, Hindus, and Atheists all had very similar experiences.  All 944 retained some memory of their death.

“Most common memories include a feeling of detachment from the body, feelings of levitation, total serenity, security, warmth, the experience of absolute dissolution, and the presence of an overwhelming light.”

While the scientists were careful to conclude only that they’ve proven that there is life after death, there will continue to be detractors who claim that the brain continues to function and gather information even after death.  Even though these people were “dead” for 18 minutes, detractors could argue that the apparent amount of time experiencing these sensations may have been distorted and may only represent a much shorter period of time when the the brain continued to function and save memories.  While I can respect these perspectives as a devout philosopher, I have to seriously wonder (as a biased participant) whether or not such theories really make much sense.  I wasn’t pronounced dead but I was told that I was dying and my blood pressure was pretty close to nothing over nothing.  I felt a “detachment from the body, feelings of levitation, total serenity [I no longer have the massive fear of death I used to hold onto], security, [and] warmth.”  I missed out on “absolute dissolution” (whatever that is) and “the presence of an overwhelming light” (rats) so I might not be a perfect fit for the NDE club but I can relate to nearly every experience that I’ve heard or read about to some degree.  Whatever you believe, these scientists are absolutely convinced that something is going on: you can expect life after death.  What that life looks like, they are careful not to speculate but they are confident that it exists.

Then again, scientists have been able to mess with our minds well enough to induce out of body experiences under controlled circumstances so critics and unbelievers (not including the atheists in the study) still have something to hold onto.  But before we let them get overly cocky about the situation, we should let them know that theoretical physicists are jumping on board with some hefty theories to explain our consciousness (or soul as you may prefer).  Biocentrism argues that consciousness creates the material universe, not the other way around. Consider this helpful expansion on the biocentrism concept:

Translation? Your consciousness will continue to exist after you die.  Where does it go?  For now, we can only speculate.  Most popular religions have some explanation to offer you if you’re interested.  However, science is beginning to offer an explanation for unbelievers as well: theoretical physicists who believe in multiple universes or multi-verses are growing in number.  In other words, your body may be dead (in our universe) but your consciousness will continue to exist in a parallel universe.  No, this isn’t stuff straight out of super hero comic books – it has a strong foundation in quantum physics (or at least in quantum theory).  Some scientists are even arguing that:

This account of quantum consciousness explains things like near-death experiences, astral projection, out of body experiences, and even reincarnation without needing to appeal to religious ideology. The energy of your consciousness potentially gets recycled back into a different body at some point, and in the mean time it exists outside of the physical body on some other level of reality, and possibly in another universe.

Does this sound like the movie Interstellar to you?  If so, rest assured that there is a reason that “hard sci-fi” movie was able to move into the questionable realms of the fifth dimension and all of that parallel universe stuff: scientists are considering these biocentric theories very seriously.  Biocentrism and quantum realism (we’re just living in a virtual reality) explain (or at least offer to explain) quantum conundrums – like how entangled photons generate opposite spins – in ways that our standard model of physical realism  cannot.  So, all of you authors and sci-fi fans out there: expand your philosophical minds a little and consider that the concept behind the Matrix (which was borrowed from Plato’s Allegory of the Cave) may in fact be reality: we’re just just watching shadows on the wall – the real reality is outside the cave waiting to be discovered.  If that is the case, we have a lot more to consider than the fantastic ideas portrayed by the Matrix.

Having grown up with a quasi-inactive-Buddhist (is that a legitimate label?), I think all of this biocentrism theory sounds very Buddhist in nature.  In fact, it sounds so Buddhist, I probably ought to find some comfort that my religion openly embraces all truth, no matter where it comes from.  Then again, non-Buddhist religions might not be too disturbed by these ideas: a minority of Mormon Fundamentalists might find these theories meshing with some of Brigham Young’s lesser known teachings as well.  Other eclectic religions may similarly find themselves undisturbed by these ideas – or by scientists killing people off and then resuscitating them for fun.  Where do you fall?  Was this a crazy, unethical experiment reminiscent of eugenics in Nazi Germany or was this an important, pioneering breakthrough?  Did they prove life after death or did they improperly ignore postmortem brain activity?  Are you ready to change your religion or do you feel like the experiment confirmed what you already believe?  If so, how do you justify your confirmation bias?  Let me know in the comments section below.