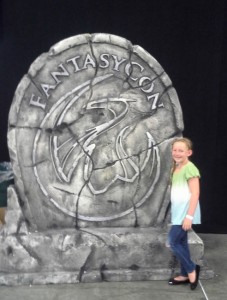 Where else can you find a Borimir-esque cosplay changing a baby’s diaper on a changing table while talking on a cell phone?  These bizarre things only happen at the world’s best cons!

As promised, I’m writing a little on my experience at FantasyCon 2014 in Salt Lake City.  I have tons of pictures of my kids with various Cosplay artists but thought Brielle just sparkled with cuteness next to the FantasyCon entry tombstone things … err … entry monuments so she gets featured on today’s featured pic.  I attended several panels with co-author Jaime Buckley and generally found the presentations to be pretty high quality with but few exceptions.  A few notable panels included:

Overall – FantasyCon ranks as the best Con I’ve attended so far.  It had everything you could ask for in a Con and much more.  From an author’s perspective, I made some very helpful contexts, learned some very insightful things, and enjoyed the ideas that were thrown my direction.  But it was great for fans too.  My kids loved it and had a great time.  All hail FantasyCon 2014!