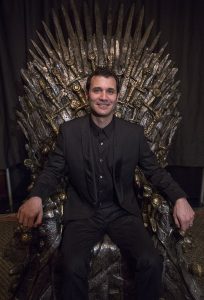 Many modern authors write while listening to music soundtracks.  I’ve been doing that for a number of years now.  “Cornered” from Salt has pushed me to write faster paced scenes and nothing has deluged me with a sense of fantasy more than Howard Shore’s Lord of the Rings soundtrack.  However, the last few years have produced a change in my listening habits.  The more soundtracks I compile and the larger my “writing” collection gets, the more I’ve realized that the majority of soundtracks that get my highest ratings are written by Berkley trained German/Iranian, Ramin Djawadi.  Given his style, I wasn’t overly surprised to learn that he worked with Hans Zimmer on a few of my other favorite soundtracks.

Djawadi has been tearing up the musical scene as composer for many acclaimed projects but is largely only known for his work on the Game of Thrones soundtrack.  If that is his only soundtrack you’re familiar with, you should treat yourself to some of his other works – and more especially his Gears of War 4 soundtrack which is underrated at best, tragically ignored at worst.  Some tracks from that soundtrack just may replace “Cornered” in the near future.

Two things set Ramin Djawadi apart from other composers.  First, he uses a lot of organic instrumentation (not true of a couple teen oriented movies) with very little emphasis on the brass section.  He features lots of drums, a plethora of creative cello features, and several exotic instruments that offer an other worldly feel without sounding … well … annoying like many other composers do when they try similar techniques.  Second, and most interestingly, he “suffers” from synesthesia – a “disorder” that creates an association of music with colors so he can visualize what he composes and visa versa.  I’d heard about this condition in the past and thought it was some sort of made up thing – you know, like people who smell math or something so rare that it practically doesn’t exist.  But he claims to have the condition and, if his music is any proof, it just may be a pretty awesome condition to have.

Have you listened much to Ramin Djawadi?  What are your favorite soundtracks of his?