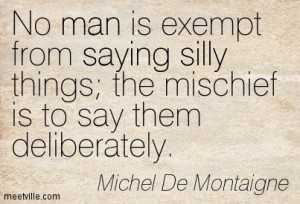 I once read that a word smith is a creature to be feared above all others.  I suppose there is a good deal of historical precedent to support that assertion – just consider Thomas Paine’s Common Sense if you can’t conjure up any other examples of world changing literature.  I further suppose that any linguist worth his salt could probably offer scores of instances where sloppy language led to substantive and sometimes massive grammatical changes.  The french “ne … pas” comes to mind since I spent a couple of years in Quebec speaking Quebecois.  Originally, the “pas” was added to the “ne” to add emphasis.  Now, the “ne” (which essentially means “no”) is left off entirely by many French speakers, choosing to keep the emphasis rather than the word that actually created the grammatical meaning.  That’s quirky.  Quirkier still is the fact that “pas” (which originally meant nothing but now sort of means “no”) is frequently replaced by other words to emphasize the negative even more.  “pas” is now replaced by “jamais” (which means never) or “point” (which means !!!!!) and other words that didn’t used to make any grammatical sense whatever.  I guess the French just really dig the opportunity to emphasize the importance of what they are saying.  Perhaps it is a cultural fear that no one is really paying attention to them.

Linguistic shifts like this happen all of the time (literally) and in every culture.  The mischief is mostly due to sloppy speaking habits but sometimes, language changes as the result of deliberate efforts.  In this case, and frankly, we should blame the teenagers.  Who else makes “cool” mean “neat” or “desirable”, “awesome” (which means “big”) to mean “cool”, “wicked” to mean “super cool”, “bad” to mean “good”, and “sick” to mean “wicked” … wait … does “sick” actually mean “super cool” or is there a difference?  I think parents should create some counter grammatical attacks.  For instance, we could say “oooooh.  That’s sharp!” when we secretly mean “that’s really stupid” or we could say “I wish I was as hip as you” when we secretly meant “you have a weird figure; I don’t think my teen should be dating you.”  Okay – maybe that’s too harsh but hey – they’re probably saying that about the parents so fair is fair, right?

Mischievous word smithery doesn’t have to change the language forever though – it can simply be a fun way of making fun of two cultures at once:

I once went to a restaurant that specialized in meat sandwiches.  There was some great word smithery on the wall.  It said “Vegetarian in Indian means ‘bad hunter.'”  Okay – it was far afield of PC-ness but it made me laugh anyway!