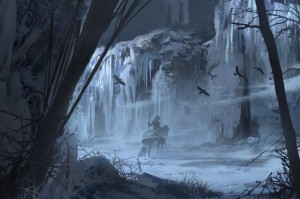 I just finished reading the first volume of Game of Thrones.  I know – I’m really behind the times here – but to be fair, most Game of Thrones fans haven’t read the books either … and it isn’t too hard to imagine why from a certain point of view.  While I haven’t followed the HBO series carefully by any means (I’ve pretty much just followed Daenerys Targaryen), it’s hard not to be immediately impressed with good acting, amazing costume design, great sets, beautiful scenery, and marvelous twists.  But much of that is a very different experience from reading the books.  What HBO has done is brought the visual aspect of Martin’s work to the fore.  They did such a fabulous job that it is difficult to read the book after watching a character arch without visualizing the actor/actress in question at all times.  Try as I might, I couldn’t help but see the actors as cast on HBO when I knew who they were.

After reading the book, there were a few things that really stuck out:

For all of Martin’s weaknesses, you can’t diss his actual prose.  Apart from deftly sucking you into the characters and plot line, Martin regularly offers various similes and metaphors that make you pause just long enough to say: that was a really clever way of saying that.  Of course, you can’t take much time to admire the writing because you want to read whatever is next but if you’re analytical about it, you can’t help but notice.  Few mega-stars write like that any more.  There is little notable beauty in most prose these days so you have to appreciate it when you see it.  If anything, Hollywood seems to think that if your book is suitable for a hit movie, your attention to prose should be fairly skeletal so as not to distract from the plot.  There is a place for that.  However, after reading a few hundred pages of Martin’s prose, I can’t help but believe that you can have the best of both worlds if you really strive for excellence.  Stepping beyond that detail, another plus for Martin’s writing is his research.  It’s evident on nearly every page of the book.  I often felt like I needed a medieval life handbook next to my side to verify my suspicions as to what various nouns were referring to.  Details from the daily life of medieval westerners abound in Martin’s writing.  You simply can’t help but notice he loves to study and think about what life was like for people at every level of the social hierarchy.  Undoubtedly, that research is what made Game of Thrones so compelling.  Well, that and several awesome plot twists.

Martin has been criticized for painting a bleak perspective of life.  The good guys die – ghastfully.  The bad guys flourish.  I wonder if Martin still feels that way since his net worth is … well, prosperous to say the least.  But I think there is more behind this bleak perspective than who wins and who loses the game of thrones.  It seems that Martin is obsessed with the worst parts of humanity.  And, perhaps, with a pre-teen mentality to boot.  Apart from what I consider old school descriptions of clothing that feel jarring (every time a character is introduced or entering front stage, they have to have a summary explanation about their clothing a la Dave Farland writing classes), Martin seems to focus on the basest commonalities of humanity.  While a few characters have lofty ideals and honor bound intentions, most characters seem to spend an awful lot of time thinking about food, physical comforts, defecation, and sex … oh, and physical pain and suffering.  If these elements were taken away from the 800+ page book, you’d have a resoundingly short novella at best.  If you can look past crude outlooks on life and a very cynical view of humanity however, there are several fun plot twists to make life interesting.  While the ending wasn’t quite as well crafted as your average Brandon Sanderson book, it was indisputably well done.  Except for the plot twist on Eddard Stark.  Would he really do that?  Hmmm.  At any rate, Martin’s cynical view of humanity is compellingly argued in the book.  Despite the fact that very few characters are actually admirable in any way, Martin sells them as quite believable.  Because of that, you can almost believe that most of humanity is distastefully disappointing.  It seems a compelling truth that even though there is good left in humanity, it really doesn’t serve much purpose except as a good example of how to fail to succeed in life.  Maybe I’m just naive but I hope he is wrong.

There is tons more that could be said about A Game of Thrones.  I appreciated how a dwarf, a cripple, and an orphan all find themselves as featured characters.  I appreciated how relatively trivial conflicts evolved into much greater challenges.  I appreciated how he dealt with character growth and … did I mention interesting plot twists?  But at the end of the day, I found myself vacillating between admiring the good aspects of Martin’s work and feeling like his focus on the distasteful and baser parts of humanity were … well … distasteful.  I’m not sure I’d recommend the books or the TV series to very many people.  If you like gore, violence, under-age-meaningless-incestuous-sex, and betrayal in huge portions, this is the product you’ve been looking for.  If not, well … speed reading can help you skip over those parts if you’re looking for the more redeeming portions of the novel.  On the other hand, as an author, I find it so refreshing to read such really good prose with such engaging characters that it is hard to just toss A Game of Thrones aside.  Undoubtedly, I’ll read at least another book in the series.