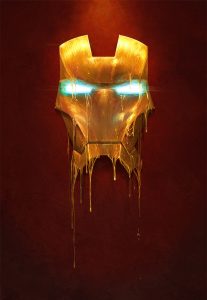 Richard Browning, a UK inventor, created a real life Iron Man suit he dubs “the Deadalus” and gave it a test flight in front of a TED conference last month.  Even though the suit can fly around 200 mph, he took it safe and easy for rather petty, pragmatic reasons: he could die if something went wrong.  Sans cool mask with glowing eyes and body armor, flying at 200 mph does present some nearly negligible risks at a few thousand feet in the air – all of which highlights the very interesting relationship between comic books and modern reality: comic books continue to inspire inventors to create things only those persons plagued with great imaginations would ever conceive of in the first place; however, inventors have to grapple with challenges Tony Stark never seemed to worry about: injuries that would inevitably be caused were we to try to actually fly inside of one of these suits.  I take it back.  Surely, someone will create a skin-thin shock absorbing cushion to prevent external injuries from unexpected collisions or crashes … and somehow those will prevent internal organ bruising as well.  It’s just a matter of time.  When they do, they might want to license the rights to the future Green Goblin who prefers to ride a hoverboard sans any significant body armor.

IRONically (bad pun intended), I almost didn’t blog about this invention.  I don’t know about you, but I’m slowly growing desensitized to the plethora of amazing inventions inspired by sci-fi/fantasy characters that hit (alternative) news sites several times a year these days: incredible senolytic drugs that nearly promise the immortality of Wolverine, squid camouflage like that featured by Mystique, magnetic sense like Magneto’s, regenerating combat robots like the Terminator, and flying suits like Buzz Lightyear are all real, upcoming technologies.  And don’t forget invisibility cloaks from Harry Potter and Dungeons & Dragons or the scuba gear that fits in your mouth or the purchasable speeder bikes featured on Star Wars or the upcoming Jetsons aircraft.  All of our childhood fantasies are becoming real life, viable technologies right before our eyes and yet, incredibly, most of them don’t go viral Facebook or Twitter feeds.  Even when NASA announced that it was building a Warp Drive spacecraft, little was said about it.  How is it that our sense of awe is so quickly fading away?  And what comic book technology do you think is just around the corner?  Let me know in the comments section.

Shout out to Sam Spratt who created the featured artwork.  There is a ton of Iron Man fan art on the web but this one caught my eye quicker than others for obvious reasons.  You can see the larger version by clicking on the picture.