I Don’t Allow Myself to Think About That 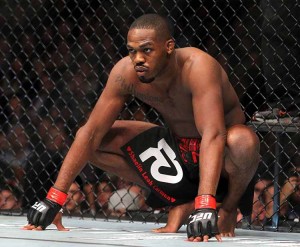 Asked what he would do if he lost an upcoming fight, Jon Jones responded: “I don’t allow myself to think about that.”  I’ve pondered that response every day since I heard it last week.

He didn’t elaborate much on that thought other than to offer his pat answers about believing in himself.  Some people might think those words would be easy to say if you were the youngest light heavyweight champion in MMA history, if you had decimated most of your opponents through the longest title holding streak in UFC light heavyweight history, if you had beaten a handful of past champions, and if you were about to defeat a two time Olympic wrestler … but that would be putting the cart before the horse.  You see, it was Jones’ mindset that put him where he is today.  Early in his career, he used to cite Philippians 4:13 (which is tattooed across his chest) after his fights: “I can do all things in Christ who strengthens me.”  With that foundation, he only allows himself to think about how he will win and what he needs to do to win.  While other fighters consider their options either way, Jones won’t stare that demon in the eyes until it is unavoidable.  And surely, the day will come when he will suffer defeat just like anyone else but that kind of determination has taken him a long way  (by the way – he soundly defeated the challenger he was being asked about).

Like Wallace Wattle and several other prominent inspirationalists, Jones focuses on creating what he wants rather than analyzing every possible outcome.  That has been one of my recent goals (well before the New Year) and I’ve found that it changes how I view the world … and I don’t intend on changing that mindset anytime soon.  Focusing on “what ifs” is, as they say, a misuse of imagination.  Focusing on “when I achieve this goal” or “how I’m going to achieve this goal” is a magical change in mentality that can make all of the difference in the world – and not just for talented athletes.  I hope (despite popular lore and the annual joking about New Year’s resolutions) this message doesn’t come too late in the year to buoy you up in your own goals but if it does … I hope you’ll set some new goals that are more inspiring to you.  It’s only one tool but I believe it is one worth riveting in your mind.

I often tell my children and those around me that the purpose in setting goals isn’t just to accomplish our goals – sometimes, we fail to achieve our goals.  The purpose of setting goals is to accomplish more than we would if we didn’t set our goals.  I have to wonder whether or not Jones’ mindset is simply on a different level altogether – perhaps the highest purpose of goal setting is to force yourself to accomplish everything you’re capable of accomplishing and learning to believe in yourself to such a degree that you no longer fail to achieve your goals.  On the other hand, such an endeavor seems exhausting doesn’t it?  Perhaps I’ve been through a few more bumps and bruises than Jones but that seems like it would take an enormous amount of energy to keep up that mindset … but maybe it is worth it.  After all, Jones seems to be resounding proof of the effectiveness of thinking that way.

What do you think: is he right or is he simply gifted?  Is he lucky or does he have the key to successful thinking?