For Beginner Geeks: Tie-Fighter Down 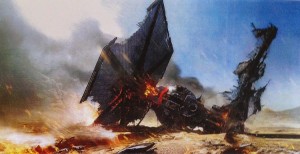 I know, I know: Episode VII concept photos were leaked quite a while ago – but I still know people (*cringe*: I shouldn’t admit that but … I know people) who still haven’t seen any of the leaked pics so I decided to post the best one.  I’m guessing this particular image comes from the hopefully epic scene where the star destroyer crashes into the desert planet.  If you are such a beginner geek that you didn’t know that already, I suggest you at least watch the most recent trailer that reveals that small tidbit.  Oh – and so you won’t feel too shy about watching it, over 58 million people saw the teaser trailer within a couple of days.  It’s cool to be nerdy now so give it a gander – and while you’re at it, make sure to exult in the possibilities while you geek out