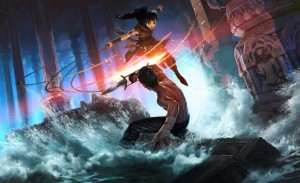 Today’s inspiration comes from Jason Chan.  Featured on Magic the Gathering cards and several book covers, Jason Chan’s art work is gaining momentum – you can see more by clicking on the image above.  To be fair, “City of Death” may appeal to me as a result of the book’s author more than Chan’s rendering – but I don’t know for sure.   Either way, Chan has to get some credit for bringing the idea to life.  The dynamic poses of the figures amidst a veritable stormy sea is interesting enough.  The pillars are interesting and the lighting is appropriately haunting but … I like the whip.

Indiana Jones excepted, I think whips are underrated as weapons in literature.  In light of that bias, a magical whip with four tails seems pretty boss.  Apart from their practical usages aptly demonstrated in the Indiana Jones franchise, whips deliver a nasty injury so their usage can be impressively multifaceted.  Sure – leather whips are pretty useless against chain mail or plated armor and they can be cut by swords but add a touch of magic and they turn boss pretty fast.  Who knows what kind of damage the shirtless dude is going to receive from that whip but as they say: it ain’t lookin’ good …

I’ve heard of whips being used in fantasy-esque literature to ignite fires, to catch foes, to shoot bolts of energy, and to well … whip things.  So what if the tails cut through metals or softer objects?  How would that be a handicap against an armored opponent?  Heck, the whole fantasy genre could be turned upside down by having a protagonist who was able to resolve violent confrontations nonviolently just by swinging those tails back and forth a little – perhaps nicking a chink in a blade to prove a point.  Or what if they made an eerie sound while being swung.  Dungeons & Dragons occasionally makes use of haunting sounds to lower the courage or resolve of an unsuspecting opponent … why not make the sound with a whip?  Or maybe the sound could be a thunderous crash instead of a sound-barrier breaking crack?  Perhaps the tails could be sentient and able to entangle multiple opponents at once … or perhaps they could grow in size as they are swung to keep aggressors even further at bay.  The possibilities seems much more diverse and interesting than your average sword and bow wielding warriors don’t you think?  What other uses would you envision for a magical whip?  What are some interesting ways to make them more appealing to the SFF audience?