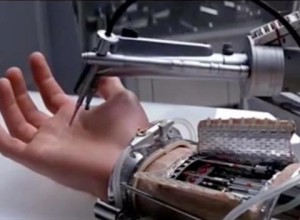 Scientists have developed a prosthetic that allows amputees to regain sensations from lost limbs.  Cybernetics – communication between machines and biological tissue – received widespread attention when the Empire Strikes Back hit the silver screen.  Luke Skywalker received a prosthetic hand that responded to physical stimulations after having it removed by a lightsaber.  The movie made it seem like an amputation isn’t really that big of a deal – sure, it looked like it hurt when the arm was initially cut off but he didn’t look bad a few minutes later when he had a new one.  Try to tell someone who’s lost a limb that it’s not a big deal a few minutes after it’s over.  I personally visited with a little girl fresh out of surgery.  Trust me, it’s a big deal (she passed out in pain after only a few minutes of waking up and crying like there was no tomorrow).  Needing prosthetics isn’t all that enjoyable either.  Even simple prosthetics are expensive and sometimes problematic to use.  Scientists may now be saying that that may soon be a vestige of the past.

Now, cybernetic prosthetics are being developed that are so sensitive that amputees can discern the difference between cotton and water.  The amputee’s degree of sensitivity can be adjusted by a computer to such a degree that amputees can remove grape stems from a grape without making grape juice – that’s an impressive degree of precision for a prosthetic hand placed on a missing arm!  It works because doctors can now attach the prosthetic to an amputee’s bone in such a way as to allow connections with nerve tissue.  Then, electrical impulses can be sent from a network of receptors all over the prosthetic back to the amputee’s brain.  Patients report that the brain learns touch.  That is, the more sensations are sent to the brain from the prosthetic, the better the brain can discern the “feelings” and process them properly.  That’s cool!

What do you think?  How far off is this technology from becoming mainstream (or affordable?).  What ethical issues do you think this might raise?  Some people have worried that if the amputee cannot afford to finish payments on products like this that the bank might repo the asset.  Your prosthetic legs might just walk you straight back to the bank where they are unattached, leaving you to take a wheelchair ride home.  What will this do to robotics and the transhumanist movement?

Update: Shoulder level amputee can control two prosthetic arms.  “By reassigning existing nerves, we can make it possible for people who have had upper-arm amputations to control their prosthetic devices by merely thinking about the action they want to perform.”  Injury leaves patients with permanent disability; repaired by elective amputation and mind-controlled, bionic hands.  New smart wires allow more flexibility in prosthetic hands.