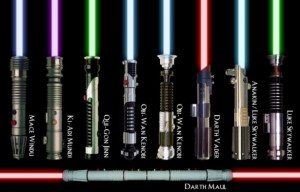 In high school, I was admittedly a nerd of sorts.  I remember being bored with my classes so I ordered a five or six volume set of Physics books so I could unravel the mysteries of the universe in my spare time … and while I was thusly engaged, I distinctly remember spending a few weeks trying to sort out the complexities of a lightsaber.  There are a number of challenges but I remember tackling some of them with my teachers after classes.  For example, some of the most basic questions revolve around making light (laser beams) telescopic – how do we do that?  You can’t.  At least, not yet.  What material do you make the telescopic tubing so that it can resist the impact of an opponent’s lightsaber?  At 17, I really wasn’t cut out for these sorts of questions.  Besides, some of the technology needed to answer the mysterious problems associated with lightsabers wasn’t even invented yet.  But all of that was so 1990s.  Now, Michio Kaku has solved all of our problems.  Well, at least most of them – he’s requesting another fifty years to finish developing the power source problem despite the fact that he has it figured out in theory.  While I’m skeptical about the strength of the ceramic core, I still recommend that you check out his video – it is worth it!