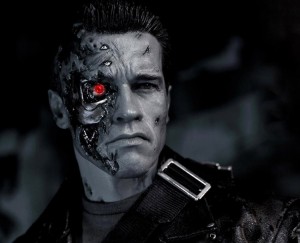 When Terminator first came out, the ideas behind it would have been laughable but for Arnold Schwarznegger’s boss appearance.  Time travel and cyborgs were so far from realistic science ventures that we all watched the movie with our reality regulators completely turned off – the same as we would have watched a movie about fairies or dragons.  Fast forward to today and we have a completely different result: new robots have been programmed to persist through adversity, including breakages and malfunctions to complete a task.  Apparently, these unbreakable robots look a little creepy when they are trying to overcome challenges (including broken appendages, etc.) so watching a dismembered combat robot crawling on the ground towards its target doesn’t seem so far fetched any more.  Further, the new robots don’t have any sensor to determine what exactly is wrong with the malfunctioning appendage – only that it has quit working and that it needs to find another 10^47 possible solution to circumvent the malfunction.  In other words, it doesn’t have any “pain” sensor to slow it down.  And it figures out those incredible 10^47  odds very quickly.

But that isn’t all.  Scientists in China have now produced droplets of metal that move on their own accord … and they can shape shift too.  Sound familiar?  I give scientists another couple decades to make the first Terminator robot.  As for the time travel thing … well, NASA is working on that but I think we’ll need at least another few decades to pull that off.  What do you think?  Let me know in the comment section below.