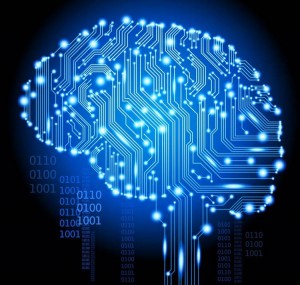 A Round Worm Brain was Copied into a Robot

The rise of artificial intelligence is no longer science fiction.  Scientists have replicated the machinations of a round worm’s brain and have given it a robot body.  Okay, so watching the robot move is just about as boring as watching a real round worm … but the implications are astounding.  We’re not talking about mind controlled prosthetics, memory erasures, brain tampering, or mind control.  We’re talking wholesale brain copying.  Scientists started with a round worm because their brains are pretty simple.  Maybe a fish will be next … or maybe a clam … who knows?  But sooner or later, they’ll be replicating chimp brains in robots and we all know what comes after that.  Probably, none of this is as scary as we’ve seen these things depicted in movies but it is something we should be thinking about.  This isn’t technology of the 22nd century here – we have it right now and it’s growing rapidly.

Computer programs have been quickly evolving for quite some time but its appearances have been somewhat innocuous: from computer chess games to virtual games, evolving strategies within computers is a growing industry that is essential to future gaming success.  In other spheres, Stephen Hawking has noticed that the computer system developed for his debilitating illness seems to anticipate what he is writing.  Indeed, some computer programmers have successfully coded games that evolve without human guidance: 3D block creatures assigned to protect a cube went from trying to stop an aggressive attack upon the cube to moving between the cube and an aggressor to preemptively attacking anything that moved towards the cube.  Maybe I changed my mind: that kind of artificial intelligence does sound a little scary!

For those of us monitoring these developments, there are plenty of regular advances marking the age of artificial intelligence: just today, Science Daily announced smart phone technology that will tell you if you have a disease or if you are developing cancer.  More impressively, they announced today that scientists have recorded memory formation.  They can now see “learning at the molecular level as it is happening in the intact brain” of healthy mice.  What does that mean?  They are recording molecular changes in mice brains to document new memories.  It might sound like fun and games when you learn that the memory involves tickling the mice – at least, it might be of some reassurance to know that they aren’t electrocuting the mice to learn this stuff – but the implications are pretty serious.  As I’ve mentioned in previous posts, the PR departments all parrot that this will have beneficial use for Alzheimer’s patients so that’s nice.  But what else will we use this technology for?  Perhaps it will help us actually predict the weather (at least better than the recent NYC snow monsoon scare).  Perhaps it could accurately predict earthquakes as well.  Scientists are already working on using brain waves to determine criminal guilt – with various tests predicting aggression in children or obesity in adults, it doesn’t seem a stretch of the imagination to see Minority Report scenarios becoming a reality.  We’re already developing combat robots so why not intelligent robot warriors?  Maybe they don’t work like the Terminator but that’s barely science fiction either – we’re actively working on every facet of that technology, including aggressive research into time travel.  I’m sure there will plenty of other benign uses as well.  Can you imagine our future job interviews?  “Jane, thank you for coming.  Please hold still while we scan your brain to determine your compatibility with our staff.”  Moments later, Jane is hired with aggressive salary incentives because the scan predicted she would drastically improve profits for the company.  The person behind her is silently reported to the police for suspected criminal behavior.  Perhaps compatibility scans will be done for pets: “sorry Johnny, you’ll never take care of this chinchilla; you’d be better off looking for a goldfish.”  Divorce lawyers could be put out of business when they are replaced by AI computers designed to predict compatibility.  Or maybe they’ll replace psychiatrists by recommending the perfect training course to rectify problematic behavior that isn’t even manifesting yet.  Looking for the perfect diet? muscle building formula?  That will all be on your smart phone … that is, if we’re not communicating telepathically through some Tatiana and Krista telepathy device.  If you haven’t heard, Tatiana and Krista are conjoined twins who share a brain.  I’m sure that causes them several inconveniences but the implications are clear: multiple organic creatures could be controlled by a single control center.  On and on it goes … but what do you think?  What are other potential uses of AI?