Combat Robots in Queue … Hydrabots Not 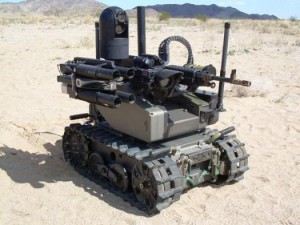 The U.S. Army has announced intentions to change rules to enlistment: 25% of all applicants must be robots!  Well, that isn’t quite the story but you can click on the image above for the full story.  The gist of it is this: one quarter of soldiers on the field will hopefully be robots by 2030.  The official reason?  Because they are ultra efficient?  No.  Because the U.S. has Star Wars envy?  No.  Because we want to reduce U.S. casualties?  No.  Because people are too expensive!  Yep, that’s it.  Training, medical costs, rehab costs, government subsidies, etc.  Who would have thought that twenty years ago?  Well, apparently George Lucas did but the costs of robots has been so expensive for so long that the idea almost seemed laughable twenty years ago.  Well, except for sci-fi geeks but we probably shouldn’t boast too loudly about that since we remain a picked on minority!

Speaking of looking into the future, I want to know why no one is talking about hydra bots.  Even George Lucas missed out on this one.  Why is it that one slice of a lightsaber kills a robot?  Wouldn’t  combat robots of the future be more versatile, with multiple backup central circuiting units to allow a damaged robot to sever damaged sections and to continue functioning as a smaller, perhaps floating machine (perhaps similar to the little lightsaber training bots)?  Or, the robot could split into multiple units on its own – sacrificing larger firepower for numerical power?  The current U.S. model is clearly designed for multi-terrain use – and that probably makes sense given our current technology – but there have been many new ideas for flying machines in the news over the past couple years.  It seems only a matter of time before hydrabot combat units become a viable option.

What do you think?