Toph – Ignoring Disability Instead Of Overcoming It 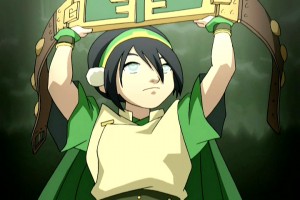 How is it that our PC saturated culture has created so few disabled protagonists in modern literature?  After all, aren’t our heroes supposed to have some weaknesses that they have to overcome so they don’t become a stale character?  Hat tip to Superman – the ultimate stale character who only has two ridiculously pointless weaknesses (magic is the second one in case you didn’t know).  Another hat tip to the Incredible Hulk who can swallow nuclear missiles and still survive.

When Nickelodeon originally cast the Avatar’s earth bender teacher, the character was supposed to be a stereotypical “big, muscly kind of jerk guy” to offset Sokka’s nerdiness (fortunately, that only comes to reality in the series during a play in which the characters are satirically mocked – Toph is portrayed as a buff dude with attitude).  However, head writer Aaron Ehasz lobbied for a female earth bender, who ultimately evolved into a blind, twelve year old girl whose overprotective parents kept her away from society.  While I’m not a huge Avatar fan who can cite Toph’s entire story arch by heart, I couldn’t help but notice that Toph is not the kind of character who wastes away her life bemoaning her disability and struggling to overcome her weakness.  Instead, she proactively explores her potential at an early age and competes in competitions with grown men – and wins.  Further, she discovers metal bending, which allows her to make a pretty boss suit of armor to rival Iron Man.  Indeed, even when she becomes an old woman and could ostensibly retire with honor because of her many accomplishments, she still has the spunk to beat up the newest Avatar (as part of her training of course).  Hat tip to Nickelodeon for letting this slip past whatever Hollywood stereotyping brass they have working there.  While I’m at it, hat tip to DreamWorks for disabling Hiccup after he crashed with Toothless instead of leaving him only gasping for breath as we’ve grown accustomed to expect.

I sincerely appreciate this type of literary treatment.  It is all too true that many disabled people use their struggles as an excuse to live mediocre lives.  Fair enough – some disabilities rightly deserve that appellation because they actually disable someone from doing much anything at all.  However, there are plenty of “disabilities” that allow people to continue to live normal lives.  Take for example, a personal heroine of mine: Safarri Jessop. She grew up deaf in a small town with a high per capita of really good people who, despite their goodness, are not known for their overabundance of overachievers.  Despite that background, Safarri has (last I heard) a third degree black belt in one martial art, a black belt in sword fighting, a blue belt in Jiu Jitsu, and she is currently studying a dozen forms of martial arts in different studios – all while acting in movies and helping to choreograph martial arts scenes.  And she teaches deaf hapkido in Springville, Utah.  Not too long ago, she even ventured a stint at playing the guitar like her father and, like Toph, she is young, charismatic, full of life, and ready to beat you up!  Far from using her “disability” as an excuse to struggle through life, she blazes through it as if it didn’t exist at all – just like Toph.

So why do people like Safarri typically get delegated to inspirational movies, supporting character roles, or dry documentaries instead of getting featured as main protagonists in literature (and movies)?  Sure, I’ve been inspired watching some of those inspirational documentaries/movies but that doesn’t excuse our lack of consideration for casting disabled persons in better roles.  Why do we ignore their ability to completely ignore their “disability” by blazing through life as successful individuals?  Why don’t we see more Tophs in literature?  Where are our modern Master Pos (from the Kung Fu TV series, not the cartoon)?  Other than Toph, Po, and Hiccup, can you name a single book or movie where the protagonist is both admirable and disabled?  If so, you’re keenly aware that they are exceptions to the rule.  Why so?

CALLING ALL AUTHORS!  Does it really make sense to have a very strong Hollywood expectation that protagonists have some weakness to overcome and then make nearly all of them strong, fast, handsome or beautiful, thoughtful, and heroic (except when they’re being spoiled)?  Why not give protagonists a serious weakness to “overcome” besides their initial disinterest in becoming a hero (may the force be with you Luke) or their loyalty to someone who is simply inferior and weaker than themselves (a la Spiderman, Superman, Duncan MacLeod, and a host of others)?  Why not make Toph the new stereotype so that we are empowering people instead of offering them an excuse to live lives of mediocrity when they may have so much more to offer?  What do you think?  Am I off my rocker or is this a serious deficiency in literature?