Why Darth Talon Could Be the Next Great Female Lead 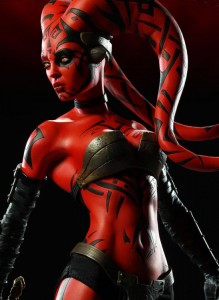 Hollywood (and book publishing) are possibly the only industries where an 80% failure rate qualifies you to be an unchallengeable authority.  Then again, maybe that’s all in the accounting.  Jabs aside, I’m happy to see more strong female characters climbing the ranks.  I do lament that they often have to take that lead by exhibiting traditionally male roles (like beating people up) but at least we’re making some positive strides.  I’m going to stray from my traditional blog posts a little to make a brief pitch: I think Disney should seriously consider bringing Darth Talon into their upcoming Star Wars movie release marathon – as lead.  Here are five preliminary reasons why:

Hear me out here.  Great characters need great character growth and something within them that makes you cheer for their success.  While traditional Star Wars movies have made Sith Lords a little one dimensional (did you ever seriously hope Darth Sidius would win? or Darth Maul? or Darth Vader before his last-second-death-bed-repentance conversion from the dark side of the force? Probably not.), there are dozens of ways you could make sith lords much more interesting (read Deceived – it’s written from Darth Malgus’s perspective).  The movies gave us little reason to cheer for sith lords – they were little more than purely evil beasts.  Sure, we thought they were cool (especially Darth Maul since he looked cool and had a new type of lightsaber) but there wasn’t much character growth in their screen appearances (death bed repentance excepted).  While Anakin’s conflict offered some sympathy for his character, we only felt sympathy for his lot in life while he was a good guy (yes, I’m ignoring the horrible acting for purposes of this blog).  Darth Talon offers a unique opportunity to explore character growth in a Sith Lord and to make the movie portion of the Star Wars universe more appealing.

That isn’t to say she won’t be evil.  She is an assassin after all.

But she has a great mental conflict.  Like any other sith-want-to-be, she is subservient to her master’s will … well, sort of … she does assassinate her own master but that’s a different issue.  Sure, some feminists might throw a fit that she is subservient to a male but anyone familiar with the canon knows that this is not chauvinism: this is the sith way.  This is the way of the dark side.  Besides, she does kill her male master.  Okay, she kills him at the direction of a higher-up sith lord but still, she achieved some level of feminist freedom.

Darth Talon has some major trust issues.  And she’s consistently being put through situations that leave her right at the edge of her abilities.  How many times did she escape near death experiences?  I lost count.  And she tries to seduce the last Skywalker to the dark side and nearly succeeds – even though she’s pretty certain he’s only feigning interest in the dark side.  See?  Trust issues.  And while she got stabbed, she may yet live – especially if, by plot twist, Cade Skywalker heals her (he can do that in case you don’t know the story arch).  And since she’s a tormented soul and because she’s has a romantic connection with Cade Skywalker (who by fan demand may heal her), there is always the possibility of converting her to the light side of the force (just to ensure we don’t break Hollywood tradition by letting a bad guy win).  All in all, she makes for a pretty nefarious villain.  But we could still justify liking her because she overcame great conflict and theoretically, by converting to the light side of the force, she redeemed herself.

She has Strong Ties with the Skywalkers

Oh – I already mentioned that.  Surely that counts for something.  Isn’t every true fan interested in what happens to the Skywalkers?  If so, you really can’t tell that story without Darth Talon.

She has a Strong Fan Base

Well, Twi’leks have enjoyed an enduring spotlight in the Star Wars universe ever since Return of the Jedi’s Jabba the Hut had a Twi’lek slave dancer (her name was Oola in case you’re not a true fan).  Perhaps the Twi’lek draw is little more than sex appeal.  The women were legendary for their beauty in the Star Wars universe, which made them subject to being slaves of wealthy gangsters.  Did you catch that?  Darth Talon rose above slavery so feminist protestors could have something to be happy about.  Maybe she could even become an advocate to stop slavery.  Okay.  Daenerys did that already.  Still, if Daenerys can create a strong audience pull for being a totally boss advocate for freedom, imagine what a beautiful sith lord could do.

If we’re cynical, we can just say that Twi’leks are nothing more than an excuse to sexualize and objectify women.  That was the immediate feminist objection to the character (Jan Duursema, Darth Talon’s creator, responds to that accusation here).  Or maybe, they’re just intended to be beautiful because humans like beauty.  Or, maybe the Lekku make Twi’lek mysterious, yet familiar, aliens.  Humans like familiar creatures as well.  It makes them more accessible, more easy to relate to.

Either way, if fan art is any indication of interest, Darth Talon’s got swag and a strong draw for the fans.

Beyond that, she’s red so she can match her cohort in crime.  Segway …

The fact that Disney has (thus far) passed up Darth Maul for a strong movie appearance is baffling.  Ask just about any 12 year old boy who their favorite Star Wars bad guy is and you’ll find  Darth Maul very high on the list (if not #1).  In the comics, Darth Maul appears with robotic legs (which were sorely needed after Obi Wan cut them off).  I’m not hip enough on Star Wars canon to know how Darth Talon lived long enough to be Darth Maul’s master only to later hang out with Luke’s grandkids but apparently, Twi’leks can live for a very long time.  That allows for some thoughtfully provided depth of character.  Having a deep sith lord cast alongside the coolest sith lord of all time could make for some interesting plot lines … and perhaps some gratuitous fight scenes with some really cool light-saber-bow twirling like we see on this fan video:

Several female leads have failed to thrive because (1) they were female knock-off characters (Supergirl, Batwoman, American Dream, Aquagirl, X-23, need I say more) or (2) they were simply unbelievable.  I remember as a little boy watching Wonder Woman with my grandfather.  Sure, I remember enjoying it well enough but only three things really stuck out in my mind: I thought Linda Carter was pretty and I thought it was ridiculous to imagine that she could block so many bullets with her bracelets and it never seemed that she would really be strong enough to rope in some of those larger men.  In retrospect, I have to think that even if her bracelets did all of that blocking on their own, it’s hard not to believe that the vibrations and/or the percussive impact of the bullets would be painfully debilitating.  Okay, I confess: I have a hard time suspending belief for characters getting thrown through brick walls too.  Either way, Wonder Woman never came across as particularly believable when I was a little boy.  How could she have a strong appeal to adult audience? (This post was written before she was re-envisioned for Gal Gadot)  Sex appeal isn’t enough.  If you don’t believe that, you missed Halle Berry’s Catwoman.  It flopped at the box office despite raving reviews about Halle Berry being the sexiest Catwoman of all time.

But Darth Talon offers that believability.  With the force, you don’t have to have strong brute force to be powerful.  Judge me by my size do you?  Hmmm?  If we can believe in Yoda as a powerful force user, we can surely believe in a strong female force use.  Like Yoda, she was known for her theatrical stunts during lightsaber duels.  Like Yoda, she doesn’t boast the musculature of Darth Maul.  Still, she can exercise mind control, conceal her presence, and strong force lightening.  In sum, she can be totally beast while remaining totally believable.

Okay – there’s my pitch.  What do you think?  What would keep Darth Talon from being a huge Hollywood success?  What’s keeping Disney from making Darth Talon a great female lead (besides the bikini thing – if it was okay for Ariel …)?  Let me know in your comments below.