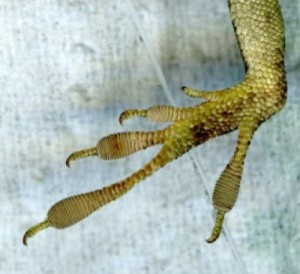 Scientists predicted, observed, and proved the evolution of a Florida lizard – but they were shocked at how fast and how much they changed.  Within fifteen to twenty generations, green anole lizard feet dramatically changed in size and in stickiness.  The adaptation was necessary to protect them from brown anole lizards who ate hatchlings.  In order to be safe, babies had to be able to quickly scamper up the tree where the brown anole lizards could not climb.  Doesn’t sound like that big of a deal?  Natural selection at its finest? Nope. The difference in size is roughly equivalent to you gaining seven inches to your height. Yikes!

Natural selection doesn’t do that.

I’m sure Creationists who believe the world is only 6,000 years old will be particularly excited to learn about this new discovery.  It certainly lends support to their perspective of evolution, if not the details.  I enjoy lively debate over these things so I think that’s pretty cool even if I personally take a middle ground.

However, this is a sci-fi/fantasy blog so I’ll cut to the chase: what does this mean for movie monsters designed from real creatures (or scary aquatic worms)? Well, if this is not the result of regulatory genes (which also allow for some cool, unprecedented movie monster ideas), it may suggest an alternate rationale for allowing creatures to evolve over relatively short periods of time.

It also suggests that there could be more reasons behind evolution than we’re currently aware of – a mountain of recent discoveries seems to be demonstrating how little we really know about the evolutionary processes.  This recent green anole lizard study suggests that when a species is put under heavy pressure to adapt or survive, there is more going on than simply killing off the least fit of the species: at least some species can positively or proactively evolve to quickly adjust to threatening circumstances.  The difference between these perspectives could be monumental.  Survival of the fittest may push a species to the edge of extinction and changes necessary to thrive may take several generations to start manifesting.  This new evidence suggests that creatures can evolve in a very short number of generations – and it isn’t simply a matter of killing off the weak – it is a matter of evolving a strength so that you do not become too weak to survive.  Undoubtedly, there may be instances when both evolutionary paths are followed at the same time – and perhaps both of these could occur at the same time when a regulatory gene has already provided the avenue for adaptation.

I’m excited about the possibilities.  Sure, everyone likes to see the movie where the scary aliens almost – but not quite – wipe out planet earth.  Wouldn’t it be more interesting if every time we thought we had the aliens licked, they evolved in such a way as to entirely change the game?  If we want to be boring, we could use time-proven gimmicks to make sequels (camera pans to an egg that wasn’t destroyed; it begins to glow and hatch at the end of the movie).  In the alternative, we could let them win for a change.  Okay – scratch that, that will never sell well … but it might be more interesting than egg cliches.

Personally, I think these biological discoveries offer promising venues for more interesting movie plots – of course, I’m biased – they sent me on the path to write Sea Dragon Apocalypse (you can track my progress on the sidebar to the left).

What do you think?  What are some good ways to use this new information on evolution to our authorial advantage?