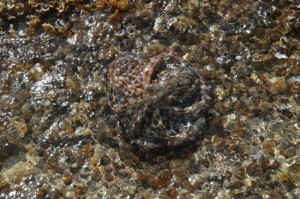 Are you looking to buy an invisibility cloak?  Do you want to hide something really well?  You might need to wait a few years but the technology to create outrageously effective camouflage is at our doorsteps.  The key?  Mother nature of course.  The octopus has been dubbed the king of imitators and along with other cephalopods, it has good reason to boast of its abilities.  Science Daily notes that “researchers have developed a technology that allows a material to automatically read its environment and adapt to mimic its surroundings.”  Translation: scientists have created an invisibility cloak prototype based upon cephalopod camouflage.  So far, the technology is only good for black and white.  However, other researchers have been similarly inspired by cephalopods and are developing aluminum nanorod technologies similar to an LCD display that “sees” its environment and mimics it – just like the octopus.  The difference?  The aluminum nanorod display can camouflage itself against a colored background.   Other researchers have been using light “bending” techniques similar to fibre optics to accomplish similar effects.  Check out the video below for more information on military efforts to create an invisibility cloak like the one featured in Harry Potter books. What happens when the technology is developed though?  In our rapidly regulated world, I can only imagine that invisibility cloaks will require special permits (like concealed carry permits only perhaps even more rigorous).  Sure, we could use the technology for parlor tricks: “Hey dude, watch my cell phone disappear!” but the possible military/criminal uses of this kind of technology is nefarious to say the least.  Don’t get me wrong – I’m far from a technophobe – I’m just looking at the reality of the situation.  Every sci-fi fan knows what the invisible man was up to and every fantasy fan knows what invisibility cloaks are best used for – and the answer isn’t scaring your friends in the dark for a good laugh.  What do you think?  Is this technology really useful for anything apart from military operations?  Will you have to get a private investigator’s license to use one?  Will it be used to hide unsightly wires from our electronics and to make our tummies look trimmer than they actually are? or will its only viable use be to annihilate our enemies?