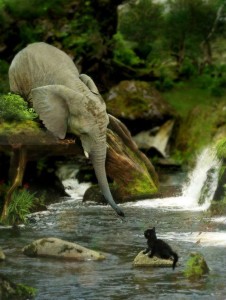 Finding pictures of unlikely animal friendships has become unfathomably trendy lately.  While I generally find these pictures of interest, this one particularly caught my eye.  How did the baby elephant end up on a broken log overhanging a river? and what is a kitten doing in the middle of the river? and who is taking this picture?  The picture is instantly riddled with queries – there has to be an interesting story behind all of this!

Apart from this specific picture and as a sci-fi/fantasy author, I think that this trend could lead to some interesting ideas.  Apart from suggesting a degree of harmony in nature that previous generations have not fully appreciated, it makes me wonder what would life on earth be like if animals were all domestically friendly one with another (wait, wasn’t that already addressed by Isaiah?) – or perhaps more imaginable, what if all predators were domestically friendly?  Beyond that, it made me wonder what unlikely sci-fi/fantasy allies might be formed if circumstances were arranged just right.  As soon as the question arose in my mind though, answers began pouring in: Legolas, Gimli, and Frodo are great example of unlikely allies.  I recently saw a picture of a lioness, bear, and tiger markedly cuddling one with another – they couldn’t be much different than an elf, dwarf, and a hobbit traveling together.  What about humans aliens?  E.T. and Elliot, Kirk and Spock (and don’t forget Blaze, Evelia, and the Magic Woman in Moon 514) and Alf and the Tanner family … animals in the past and animals in the future?  Star Trek IV: the Voyage Home …  What about aliens with aliens?  Ugh…  maybe that is a bad idea: I’m thinking Superman versus his home planet nemeses (not such a great plot), Alien versus Predator … (I didn’t see that one and I’m probably the better for it).  Maybe that is why the humans versus aliens makes for a more engaging storyline.  Now that I think about it, maybe this idea is as old as the hills!  Then again, there is always room for a new twist on an old idea.  For instance, consider this: 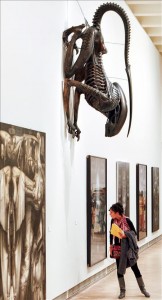