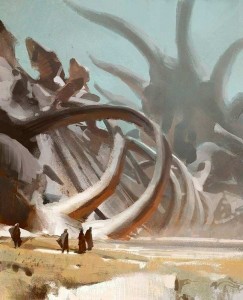 Personally, I think great fantasy art has spurred more story ideas in me than anything else.  This particular image really caught my imagination (send me a link if you know where it came from – I can’t find it again).  Originally, I imagined that this was a dragon.  Then, I noted that there do not appear to be any wings on the creature.  As I ceased to suspend my imagination, I noted that bones don’t get unearthed like this and wondered what the author’s story might be – what did he/she intend?  A lot of the story has nothing at all to do with this image but the opening scene does.

Then, I considered that only a magical unearthing could lead to bones being left like this … or billions of insects … and off I went, wondering about the image and then writing a whole new book: Unproven. Most of the story has nothing to do with this particular scene but it ended up being a crucial part of the plot, nonetheless. You can read sample chapters here.