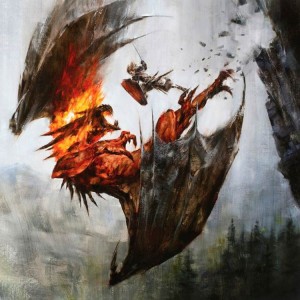 You might’ve noticed: I love Eric Velhagen’s artwork – he doesn’t fail to offer plenty of action, movement, interesting poses, and often, an intuitive storyline.  I haven’t read the Silmarillion yet (yes, that is a shameful admission coming from an author but hey … it’s dense) so I have to confess that I was surprised at Velhagen’s use of a dragonesque creature for the demon but it certainly works.  Without reading the story, I have to admit that I’m guessing Glorfindel doesn’t come out victor of this battle even though he’s on top and looking pretty determined – and not just because Gandalf later fights the balrog – he just looks … well, outmatched.  All hail Sir Velhagen!