Finally, Drivable Airplanes for Everyone 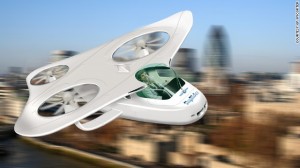 Proposals to produce a Jetson-esque flying car have flooded the industry but we’re just now receiving promising proposals.  The European Union is now focusing on “MyCopter” as a solution to the world’s traffic congestion problem.  Designing a flying car that is user friendly while allowing for the idiot factor has been their primary concern.  They want a car that can be “driven” by anyone.  At the same time, they recognize that not everyone who drives should be behind the wheel (yes, it has a steering wheel) of a flying car.  MyCopter is therefore focusing on simple controls that ordinary people can easily learn (relatively speaking) – hence, the time proven steering wheel.

Although their proposed release date is 2050, they apparently don’t have much faith in the widespread growth of transhumanism before then.  Indeed, they are working on a car-to-car interface that allows the flying cars to adjust for human errors: the concern of course is that flying accidents will be much worse and more devastating than land based automobile accidents so we’ll need computers to protect us from ourselves.  I don’t know about you, but I’m sort of holding out for transhumanism to give us Jedi reflexes so we can get around some sort of organized traffic system like we saw in the newest Star Wars trilogy … or maybe not, I also like the idea of getting out of the rule-infested universe I currently live in.  Maybe that genre of 3D traffic nightmare can be avoided outside of our largest cities.

Perhaps not too surprisingly, MyCopter uses small propellers much like the recent speeder bike design I blogged about last month.  Personally, I wonder which is more practical:  hover craft speeder bikes or flying cars. On the one hand, speeder bikes can eliminate the need for paved roads and they can navigate the wilds of the world as well.  It is the perfect union between science fiction and the ultimate hickmobile.  But, their speed is limited and their ability to perform navigational tricks (limited to flying vehicles) may be less than desirable for thrill seekers.  On the other hand, flying cars will allow greater speed and navigational freedoms but they will also (inevitably) end up creating a certain degree of nasty accidents that a speeder bike could and would avoid.   What do you think?  Should flying cars be limited to space use?  Should we stick to speeder bikes?  Should flying cars require a more demanding licensing procedure or should we just trust in some great car-to-car interface to protect us all?  Most importantly, should they be equipped with laser guns to take out those pesky spy drones?