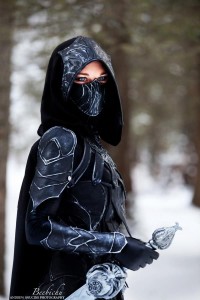 I confess: I have almost zero knowledge about Skyrim.  I understand that it’s a video game, that it has a beast logo, and from screenshots, it appears to have some pretty legit graphics.  Beyond that, I know nothing.  I do know that the female body armor featured in this Skyrim cosplay does everything that the majority of fantasy artists have largely failed to accomplish: female body armor that … well … PROTECTS the body!  Sure, I acknowledge that authors, artists, and Hollywood have all been significantly trending towards something more legitimate than the barbarian / amazon warriors portrayed in the 70s – and some have done quite well (hat tip to Snow White and the Huntsman) – but it isn’t uncommon for entertainment to ignore this pragmatic side of combat: people get hurt.  Shockingly, the designer of this armor was a woman …

And while this particular image hints at a few places that may not be fully protected (joints are always an issue but to be fair, leather joints are commonly portrayed in male armor), it does two things very well besides protecting the wearer: it allows those alluring eyes to distract the unwary and it carries an element of intimidation as well.  Given that awesome duality, I couldn’t help but to share this image.

Okay – in the interest of equality, there may be a legitimate role for female warriors who forsake body armor.  It’s not uncommon for storylines to introduce distracting beauty in order to introduce an element of surprise.  So, in the interest of equality for all artists seeking artistic justification to create something aesthetic and beautiful as well as a little beast, here are a few options worth considering: 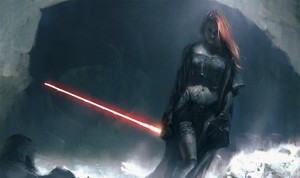 Sith Lord guarding a tomb – perhaps the one full of sith artifacts. If that’s her job: turn around and leave right now. Forget the fact that she has incomplete body armor. You’re outgunned. 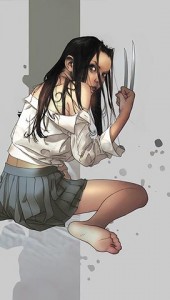 X-23 was a female clone of Wolverine. Sure, you could probably cut her up or shoot her but do you think that is going to stop her? Get smart: turn on the charm and become best friends or turn around and run. 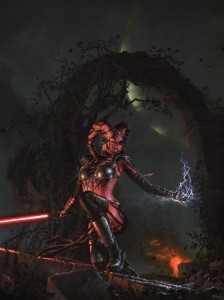 Darth Talon – a Sith with ties to Darth Maul. Disney probably won’t be making a standalone of this hyper-sexualized sith lord but each of her tattoos represents a conquest (the dead kind). Plus, she’s about to ignore her lightsaber in favor of just toasting you with lightning bolts. Forget the charm this go ’round. Run while you still have the chance.

No, I didn’t forget Rhonda Rousey (yes, I know, she’s all the rage for tough feminism but last I saw, she wasn’t fighting someone with bladed or explosive weapons).  Besides, I can’t see her putting Khal Drogo or Brock Lesnar in an armbar – the natural inequality caused by different weight classes is undoubtedly what created the need for combat weaponry in the first place!