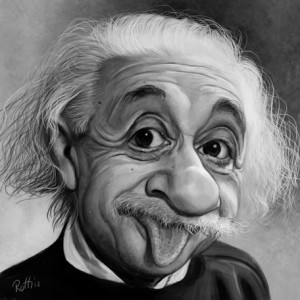 At FantasyCon, I heard a quote from Einstein that every fantasy author should know:

“When I examine myself and my methods of thought, I come to the conclusion that the gift of fantasy has meant more to me than any talent for abstract, positive thinking.”

Part of me wonders whether or not I share the same paradigm of fantasy and imagination as he did.  Was he thinking H.P. Lovecraft, J.R.R. Tolkien, Edgar Allen Poe? or was he thinking Lewis Carol and the Brothers Grimm?  Or, when thinking of fantasy, was he thinking about creativity, Mickey Mouse, and bedtime stories?

Either way, as a sci-fi fantasy author, I have to agree.  I suppose it is easy to agree with such good company – so easy in fact that perhaps I should blush for having said it at all!  However, I think the implications of what he was saying expands beyond these genres of literature.  I think what he was really getting at is the ability to use our brains for something other than analytical cognition.  En masse, many of today’s schools pump out a zombie mentality of memorize and regurgitate but fail to really help our children learn how to think critically.  Michio Kaku, a theoretical physicist has noted that this has caused a dilemma of epic proportions – our “best and brightest” PhD candidates are mostly foreign born and they mostly go back home after finishing their degrees.  This is an alarming fact to anyone concerned about our nation’s future.  Anyone can memorize and regurgitate but there is a certain level of discovery that can only come from learning to think in creative ways.  Indeed, Einstein once quipped that he wasn’t any smarter than several of his colleagues – he had just learned to distaste authority figures so much that he couldn’t accept what other people asserted as truth unless it could be empirically proven.  That led him to wonder what might truly be the truth (what he heard or something else) and that led him to discoveries that other people were unable to even imagine before he taught them.  In short, he cherished his imagination and he cultivated that tool.

I recently took a course on creativity and was reminded in an astonishing way about how important this skill really is in every field of life.  As a sci-fi author, everyone would expect that I have to keep my creative juices flowing – or suffer from the infamous “writer’s block.”  However, keeping the creative juices flowing in business is the lifeblood of innovation in every field.  People like Steve Jobs have demonstrated this in high tech gadgetry but many lesser known – albeit gargantuan – discoveries have all come from thinking outside the box.  Did you know that scientists were recently able to implant a memory into a creature and prove that it worked?  Did you know that a successful brain transplant in a monkey worked (it survived for a week after the transplant)?  Did you know chips in the brain allow quadriplegics to “type” without using their hands?  Did you know that one scientist was able to control another scientist’s body by connecting their brains through computers?  Did you know that computer software designed to train virtual creatures has led to unexpected artificial intelligence?  Did you know that robots have been designed to “learn” how to walk without being programmed to walk and that these tests have been successful?  The latter programming was done based upon replicating nervous systems rather than focussing on artificial intelligence.  On and on the list goes of interesting new ideas championed by creative scientists of our time – and yet this crucial skill is often lost in our kids … unless we let them read sci-fi/fantasy – go buy a book!  Moon 514 is still on sale at Amazon.com.

Click on the image above to check out Cliff Roth’s awesome caricatures on Google+.