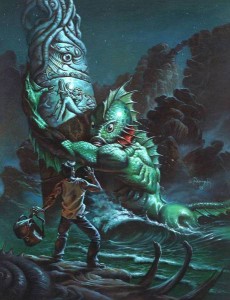 I confess: until today, I’d never read anything by H.P. Lovecraft.  Frankly, the “horror” label combined with its awful, original illustrations have kept me at bay for many years.  However, at FantasyCon 2014, his name popped up so many times that I couldn’t help thinking that I should be reading some of his stories.  After one panel discussed his writing extensively, a fellow fan recommended “Dagon” because it is both short and representative of his writing.  I decided to give it a try.  Besides, the more I heard, the more I realized that Lovecraft was thrown under that horror label before science fiction and fantasy became mainstay labels – no one really knew where to categorize his writings so they got stuck under horror much like Frankenstein and other great works that only marginally belong under the horror label – that is, by modern slasher / blood letting standards.

So, here is a short sample of the story (no noteworthy spoilers):

Though one might well imagine that my first sensation would be of wonder at so prodigious and unexpected a transformation of scenery, I was in reality more horrified than astonished; for there was in the air and in the rotting soil a sinister quality which chilled me to the very core.  The region was putrid with the carcasses of decaying fish, and of other less describable things which I saw protruding from the nasty mud of the unending plain.  Perhaps I should not hope to convey in mere words the unutterable hideousness that can dwell in absolute silence and barren immensity.  There was nothing within hearing, and nothing in sight save a vast reach of black slime; yet the very completeness of the stillness and the homogeneity of the landscape oppressed me with a nauseating fear.

Published in 1919, Dagon is far from the Orwellian / Hemingway-esque style of terse, straight to the point writing that has come to dominate much of the big five publisher’s draft picks.  Indeed, the story almost rides on its descriptions:

… a portion of the ocean floor must have been thrown to the surface, exposing regions which for innumerable millions of years had lain hidden under unfathomable watery depths.  … Nor were there any sea-fowl to prey upon the dead things.

The character development was almost indiscernible other than the fabulous one liner “I think I went mad then” and the ending was immensely unsatisfying by modern standards.  However, I personally love that old style prose that is so descriptive and engaging that you feel immediately sucked into the scenery whether you like it or not.  And while the short story lacks the fabulous intricacies of modern sci-fi/fantasy like “LOST” or “Dollhouse,” it was novel and groundbreaking in its day and it continues to inspire modern artists (see the picture above).  No one doubts the legacy H.P. Lovecraft left to the science fiction / fantasy genre but it remains surprising that his writings are so … well … unknown to modern readers.  If you don’t read anything else, at least read “Dagon.”  It’s only a few pages long, has some great passages, and offers a nostalgic view of the fantastic that is worth visiting.  For me, I’ll be checking out more of his stories in the near future.