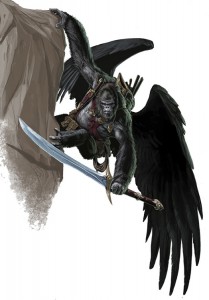 All too frequently, fantasy art falls a little flat and often worse … it gets downright cheesy.  Flying gorillas usually fall into that latter category – just google them and see for yourself.  **shudder**  “You Shouldn’t Be Here” by Ben Wootten is an exception to that rule.  This guy actually looks pretty boss: his sword looks designed for someone his size (not borrowed from some errant knight), his wings are reasonable in size (perhaps a titch small but aesthetically pleasing), and his expression is just right.  Even if you don’t love the piece, you can at least see some great  potential for a flying gorilla as a character in a story … which is a whole lot more than most of the other artwork out there.  Huzzah for Ben!  You can see more of Ben Wootten’s art by following the link above.