Barbarism & Challenging Your Own Paradigms 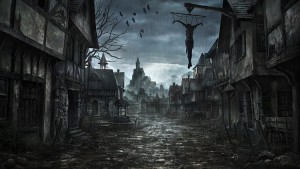 In a day when safety from political incorrectness and psychological trauma are nearly universally esteemed as inalienable rights, it is occasionally difficult to imagine a world where public executions and talionic (physical) punishments are the norm.  After all, we’re half way across the world or a century away from such “barbaric” practices.  And yet, in a fantasy world where these types of things commonly occur, authors often treat them as if they are not a big deal at all.  Few onlookers suffer emotional trauma worthy of note – perhaps they only wince and look away – perhaps a family member cries out in agony – but everyone else just goes back to their daily lives.  Few victims require months to psychologically recover from whatever happened to them.  Often, few details emerge as to how such an event might affect the main characters who watched the event.  A gratis “but the image haunted her memory for many moons after that day” is supposed to be sufficient.  As a historian, I have to doubt the realism behind such passing statements.  So, how should an author address these types of issues if they want to be more true to life experience but have no experience to pull from?  First, we must do a little research into history.

It is doubtless true that when public executions were common occurrences, at least some people learned to be somewhat callous towards them.  Even Christian sources inform us that a certain portion of the population learned to encourage public punishments and to look for opportunities to participate in them.  We also learn from the broader historical record that public executions and public lashings went a long way to deter crime.  That’s the whole argument in favor of talionic and/or capital punishments in most places where they are used.  That fact suggests that some people – maybe even most people – were traumatized by what they saw.  Perhaps they learned to be more capable in dealing with those traumas than their modern PC counterparts but they were affected by what they saw nonetheless.  For instance: I saw an auto accident when I was fourteen years old.  A young girl’s thigh was at least 75% missing and very bloody.  I can still see that image in my mind nearly three decades after the fact.  It doesn’t haunt me but it made a strong impression on me: don’t stand while riding in the bed of a truck – even if you’re holding onto the cab – and don’t listen to people who say “don’t worry, it will be okay.”  That seems an easy lesson for modern kids but in the 1970s and 1980s, riding in the back of a truck like that wasn’t uncommon.  Heck, it wasn’t even reason enough to determine a parent was unworthy to retain custody of their children.  A couple of years later, I was assigned by my employer to clean up a likely fatal stabbing in the back alley and then up the sidewalk to the corner where someone picked up the victim – probably about 100 feet away from the original stabbings.  I still remember the bloody mess on the outside walls of the building and on the ground where he fell.  I remember the trail of blood interspersed with small pools of blood where the victim rested for a moment as he slowly crawled to a place where he could get help.  There was very little blood towards the end of the trail and there were large pools of it on the wall and on the ground where he first fell down.  Because of those details, I’m pretty sure he didn’t survive but I didn’t follow the story on the news.  I really didn’t want to know.  On top of that, I’ve been attacked with knives and baseball bats and several assailants at a time.  But all things considered, I’m a pretty well adjusted adult.  That said, I’m really quick to respond to dangerous situations – possibly too quick.  Perhaps I overreact.  Any war veteran could probably say the same thing.  So yes, people move on after surviving or witnessing tragic and bloody events – but that doesn’t mean that most people become callous to it.  It also doesn’t mean that most people freaked out every time they see these things either.  The historical record tells us that there is a whole gamut of experience within a crowd that watches a lashing, an execution, or some other form of torturous punishment.  As authors, we need to be more aware of that diversity of experience.  Besides, it is a great opportunity to underscore character growth and to reveal thoughts and feelings unique to our characters that bring them to life for our readers.

Huzzah to Jonas Dero, the awesome fantasy illustrator responsible for the featured image.  Follow the image’s link for more of his work.